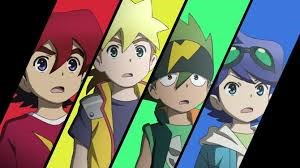 The 2D-robot combat game will let young fighters step into the role of one of the four Tenkai Knights heroes and stop the evil Vilius and his army of shape shifting robots from destroying planet Earth and Quarton.

Along with the game, Tenkai Knights is supported by a 52-episode TV series to air in Europe, distributed by VIZ, a fully integrated marketing campaign, and a toy line developed by Canadian toyco Spin Master.