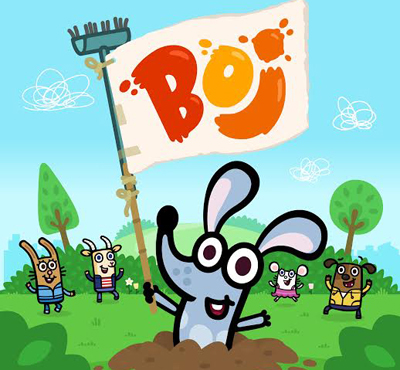 Set to air on Zouzous later this year, the humorous series is a co-production with Irish studio Kavaleer Productions and Welsh animation company Cloth Cat.

Created by Pesky (The Amazing Adrenalini Brothers), with recognized preschool scribe Dave Ingham (Charlie and Lola, Timmy Time, Fireman Sam, Bob the Builder and Fifi and the Flowertots), the series follows the problem-solving adventures of Boj, a creative and discovery-loving Australian Bilby (marsupial) from Giggly Park who is not unlike a five-year-old boy.

Boj is set to make its network television premier this summer on CBeebies in the UK, and has been picked up by additional broadcasters including Sprout (US), ABC (Australia), RTE (Ireland), S4C (Wales), YLE (Finland) and Yoopa (French speaking Canada).

The series, which was first introduced at Cartoon Forum 2011, will feature 12 original songs written by Belle and Sebastian’s Mike Cooke and Jason Donovan is signed on for voice work and theme song duties.

UK-based Union Media has also been appointed to distribute the series internationally for all additional territories.