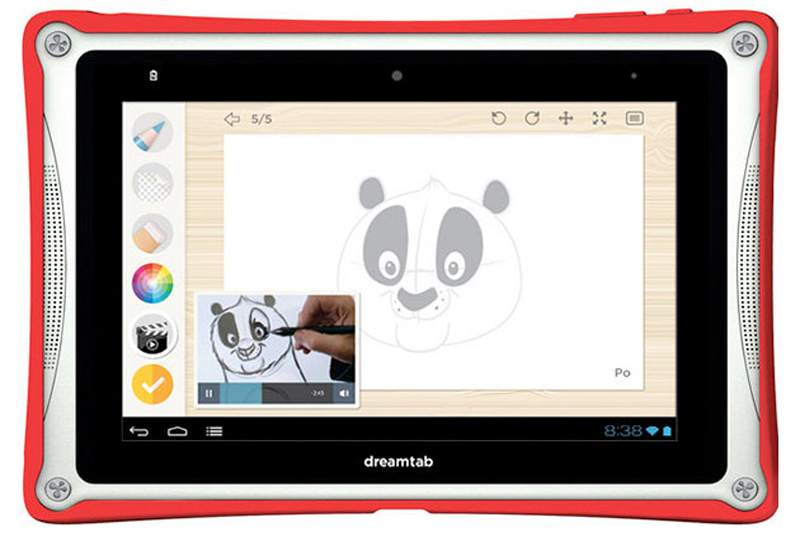 Set to be introduced at this week’s CES before hitting US retail this spring, the tablet includes a substantial number of original and differentiating features including exclusive content from DreamWorks animators that kids can customize and a creative studio educational program entitled “Be an Artist.” The feature gives kids one-on-one animation lessons, with acclaimed DreamWorks artists using the same stylus tool employed by the studio for hit films such as Shrek, Kung Fu Panda and How to Train Your Dragon.

Additional features include advanced parental controls, a curated app library, the enhanced Fuhu education Wings Learning System that adapts to children’s levels of math, reading and writing, offline Bluetooth-enabled workbooks that work in conjunction with the tablet experience and a variety of kids programming from DreamWorks, Nick, Disney, Cartoon Network and other leading kidsnets.

The DreamTab also features safe e-mail, text and photo sharing capabilities and leverages near field communication gaming technology a la Disney Infinity and Skylanders to bring physical DreamWorks-branded toys to life. The first game to utilize the technology is online multiplayer School of Dragons featuring DreamWorks’ How to Train Your Dragon franchise.

The tablet, which will also roll out internationally later this year, comes in eight-inch and 12-inch versions with 16GB and 32GB options, and its regularly refreshed original content is made possible from cloud-syncing technology. A price tag for the DreamTab has not yet been announced by its co-developers.

The new tablet comes on the heels of Fuhu’s best-selling nabi tablet for kids six to 11.