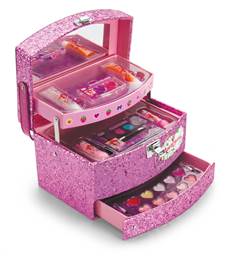 The deal, with the Climaco Group’s Fenzza Makeup brand, was negotiated by Exim Licensing Group, licensing agency for AGP in Brazil. Strawberry Shortcake is known in the region as Moranguinho.

Featuring various colors and packaging, the Strawberry Shortcake makeup line incorporates several of the girls from the animated TV show, Strawberry Shortcake’s Berry Bitty Adventures, which airs in Brazil on Disney Junior. Little girls will be able to express themselves with four individual makeup palettes: red for Strawberry Shortcake; orange for Orange Blossom; purple for Blueberry Muffin; and green for Lemon Meringue. The line will also include body glitter lip gloss, eye shadow, and nail polish.

All of the products, which were unveiled at the Beauty Fair in San Paulo in October, are available at major retailers in Brazil.