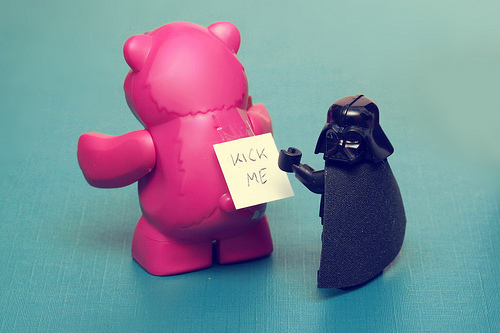 Standing in front of people in your underwear

My mom called me in the middle of last week and asked me what I’m up to. “Well,” I replied, “I’m just spending the week standing in front of a bunch of people in my underwear and asking them to give me suggestions as to what I could improve.”

Here’s where I admit that I didn’t mean this literally. (Sorry for the tease, folks!) But it was the way the week felt, as I spent a ton of time taking the game that I’ve been working on, which is very much at an early prototype phase, out to show it to people and invite them to kick the tires. To give you a sense of what I mean, here’s a peek at my schedule for the week:

● On Monday, I conducted a two-hour focus group with the teachers from our recent user testing in schools, probing them in detail on their reactions to the game and whether or not they’d be able to use it in their classroom.
● On Tuesday, I invited a handful of game designers and industry folks over to my office to drink some beer, eat some snacks, and play the game and tell us what they thought.
● On Wednesday, I pitched a funder on the big picture of the game and the program around it. As soon as that meeting was over, I spent another hour walking a department from my company that specializes in working with schools through all of the details.
● On Thursday, I had three hours of meetings with our developer to discuss what we thought could be improved in the game moving forward as a result of our pilot findings and their technical considerations and design ideas.
● On Friday, I visited a big charter school network’s professional development day, pitching teachers and administrators on the value of our program and getting their feedback on what we’ve done so far.

So, first of all, I’m exhausted and I need to have fewer meetings!

But in all honesty, it was a terrific and insanely productive week. Each of the groups of folks who were kind enough to spend their time giving myself and my team feedback brought something really different and important to the table.

Teachers are our clients, and, along with their students, the ultimate users of what we’re making. Getting their feedback gives us insight not only as to how our program can be used in a classroom, but frankly, whether they think it’s worth their time in a school year already packed with obligations and expectations (and what adjustments we can make to make it as useful to them as possible).

Designers are our peers, our colleagues, and our allies. Having a group of people who are interested in making educational games play what you’re working on is an opportunity for a kind of feedback and collegiality that’s all too rare in a start-up culture where we sometimes see ourselves as competitors. I loved opening our product up to this peer group, flaws and all, and they were incredibly generous in talking specifically about design decisions we were grappling with and suggesting other games to play that might prove inspiring. (Thanks to this, I’m neck deep into a game of Phoenix Wright, Ace Attorney!) We’re hoping to make this a regular group where people working in educational games in New York can share work in progress and get feedback.

My other meetings were really valuable as well. My colleagues who aren’t on the production side of things know what it’s like to be out in the real world using these kinds of games, and have a deep knowledge of the other kinds of products being used in classrooms. Funders ask important questions about our plans in the market, strategy, and scalability. And of course, being in close contact with our developer about the kinds of adjustments we might make as those ideas are forming is critical. They are our true partners in this process, and sharing the feedback we’re getting as it’s coming in helps us be realistic about what’s feasible and which ideas have the most merit.

It’s been a whirlwind to say the least. Getting this volume of feedback is not something we could do every week, that’s for sure. (I’m pretty sure I need to actually make the game at some point!) And, though it happened to be a good time to invite and process feedback — we’re at a point in development where we’re far enough along to give people a real sense of the plans, but not too far along to make substantive changes – there are certainly times in production where outside ideas are less helpful or relevant.

But it did remind me of the value of looking beyond user testing alone and being rigorous about asking for feedback from a wide range of people. Mostly, I was impressed all over again with the generosity and wisdom of my wide range of friends and colleagues, who stepped up, contributed their time, and shared their insight with us. I look forward to returning the favor. After all, who doesn’t want to know how they look in their underwear?