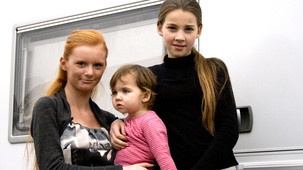 Documentary series My Life is set to return to UK pubcaster CBBC early next year with seven new 30-minute films that follow the lives of UK children and their global adventures.

Documentary series My Life is set to return to UK pubcaster CBBC early next year with seven new 30-minute films that follow the lives of UK children and their global adventures.

The upcoming features, each from a different independent production company, will run the gamut from aspiring Paralympians to a young girl living aboard a floating hospital in Africa. The seven initial stories airing in the new year will be followed by 10 more new films aired in 2015.

My Life: Race For Rio follows three teenagers on the road to Brazil as they attempt to become Paralympians. My Life: Peter’s Circuss circus. In My Life: The Floating Hospitalold British girl, sails with her family on The Africa Mercy. My Life: The Most Famous School In The Worldpart film that follows three boys who have all won New Foundation Scholarships to Eton College, while My Life: Born Lucky meets teenager Joanne, one of only seven people in the world born with no limbs due to a condition called Total Amelia.

My Life: One Way Ticket follows 10 year-old Daniel and his family as they move lock, stock and barrel from Devon, England to Wellington, New Zealand. And My Life: Signing Off features 10-year-old Ben and his youngest sister, who are the only two hearing people in a deaf family.