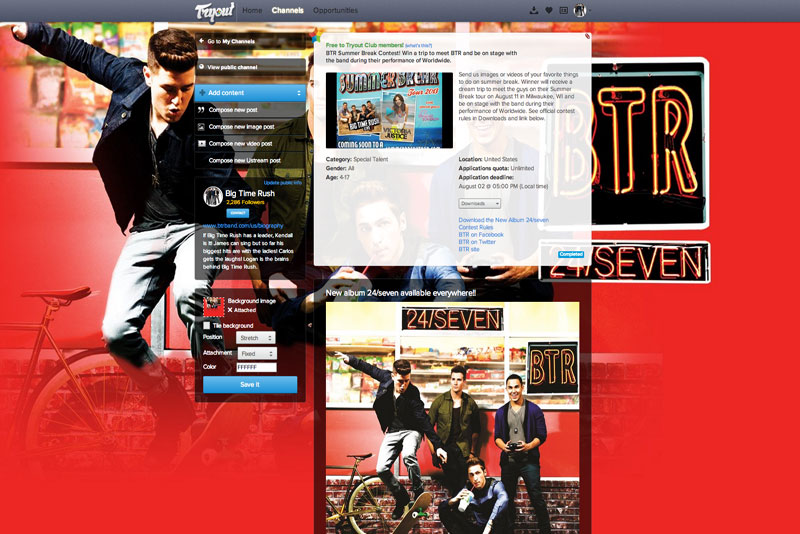 With TV talent searches and newly discovered Justin Bieber-esque pop artists infiltrating mainstream culture, it may seem easier than ever to become a rising star. In actuality--and not TV reality--helping kids hone their talents isn't so simple. Enter Tryout.net.

With throngs of TV talent searches and newly discovered Justin Bieber-esque pop artists infiltrating today’s mainstream culture, it may seem easier than ever to become a rising star. In actuality—and not TV reality—helping kids hone their talents isn’t always so simple.

Enter Tryout.net. The newly launched platform is designed to connect kids and parents to entertainment brands, as well as talent opportunities. The free and subscription-based website serves as a tool for parents and kids to pursue various interests—from finding registered soccer coaches, to following favorite rock bands. But there’s also an inherent user-generated content element that lets brands directly interact with interested fans via contests and other social media offerings, in a fully COPPA 2.0-compliant setting. Based in Israel and California, the three-month-old company of the same name has so far raised US$750,000 in funding and attracted more than 15,000 users within a month of going live.

“We’re giving kids a way to get their social media fix that’s allowable,” says Brad Schultz, co-founder of Tryout and the former head of Mind Candy’s TV division. “There’s such a plethora of new talent out there—look at  how YouTube’s been used as a way to discover talent. But this gives kids a chance to start at a younger age and get more personal with professionals and brands. Also, platforms like Facebook and Twitter are not COPPA-compliant.”

To be sure, Tryout is not a true social network since users can’t see other members’ profiles, but it is akin to Facebook in the way enables users to follow brands they like.  For instance, Nickelodeon brand Big Time Rush hosted Tryout’s first contest, which drove 3,000 kids to enter right off the bat. Participants (primarily six to nines) learned about the contest via Big Time Rush’s social media efforts, and 32% of them ended up watching videos on the band’s Tryout-hosted channel.

“The idea of making a kid a star is changing,” says Tryout co-founder, Ben Laski.  “The goal is not to be a superstar, but every kid has a talent in something, so here’s a way to explore that and find opportunities to go after.” Tryout offers a premium model for parents that includes a one-time US$1 verification fee—part of which is donated to charity—allowing kids to explore the site and follow selected brand channels. For premium content and access to things like casting calls and modeling gigs, the site charges US$9 per month per child for unlimited submissions.

“We want to make sure the parents and kids don’t just apply for everything,” says Schultz.  The company has employees dedicated to manually verifying businesses and independent instructors. “Every one of these brands, bands, sports outlets, etc., has a channel on the site and is vetted beforehand,” says Laski.

Of course, just like in the entertainment world, it’s who you know. And Tryout is in the midst of building its membership base and network of partners. The goal is to build a large online rolodex of casting directors, talent agents and brands in the kids media business. “A lot of these companies have difficulty engaging kids,” says Schultz. Therefore, the contest element is a large driver for Tryout, which also houses a proprietary contest platform that lets brands reach out to parents directly—such as requesting parental approvals for entries. But with 70% of subscribers under the age of 13, the focus remains on the younger cohort.

“We’re working across a number of different verticals, all tailored to kids,” says Schultz. “We want content from both celebrities and big media brands, as well as coaches and industry professionals, so that every kid’s interests are fulfilled.”