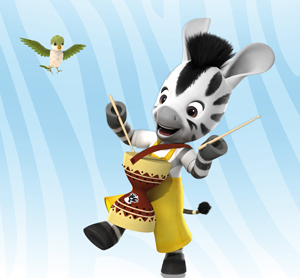 Coming out of MIPCOM, Paris-based Cyber Group Studios has secured a significant round of new TV sales for its kids properties including Zou, Mademoiselle Zazie and Mia.

Coming out of MIPCOM, Paris-based Cyber Group Studios has secured a significant round of new TV sales for its kids properties including Zou, Mademoiselle Zazie and Mia.

For Zou (104 x 11 minutes), Italian pubcaster Rai has picked up the Cyber Group/Scrawl co-produced series for Italy, Spanish-speaking pubcaster VME TV for the US Hispanic market, and a home entertainment deal has been inked with Netminds for DVD releases in Argentina, Chile, Peru, Uruguay and Paraguay. Additionally, Cyber Group has inked pre-sales for Zou (season two) from Canada’s Tele-Quebec and France TV.

Preschool series Mia (39 x 11 minutes), which is produced by Cyber Group with Sardine Productions and Spacetoon, has been pre-sold to VRT (Belgium),TV2 (Norway) and Pro Plus (Slovenia). The show is set to launch next year on Tiji (France), Radio Canada, and Spacetoon in the Middle East, Malaysia, and Indonesia.

All of the deals have helped Cyber Group double its international sales since October 2012.