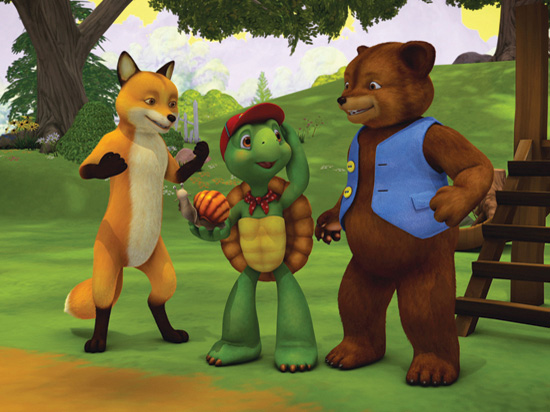 Canadian cartoon factory Nelvana is to see its Franklin and Friends kids series reach around 400 million Chinese households via a licensing deal with national broadcaster CCTV.

Canadian cartoon factory Nelvana is to see its Franklin and Friends kids series reach around 350 million Chinese children via a licensing deal with national broadcaster CCTV.

As the MIPCOM market kicked into gear Monday, the  Chinese deal was hammered out by Ciwen Media Group, the local agent for Nelvana Enterprises which just last week inked a deal to bring Jelly Jamm to China, and CCTV Kids Channel, which will air the animated series.

Airing in Chinese, the 52 x half hour animated series premiered in China on September 23.

Ciwen is launching a Franklin merchandising line to accompany the Chinese broadcast debut, which will integrate TV, new media platforms, publishing and consumer products. The first of such deals is a publishing one with Jieli Publishing, for 12 TV tie-in books published before the end of the year.

Franklin and Friends is a Canada-Singapore co-production between Nelvana and Infinite Frameworks.

In other MIPCOM news, Canada’s Distribution360 unveiled a first look deal with Skywriter Media & Entertainment Group to distribute its kids and family programming, which includes TV series like Atomic Betty and The Raccoons. In all, the Skywriter catalogue will add around 250 additional half-hours to Distribution360′s catalogue.