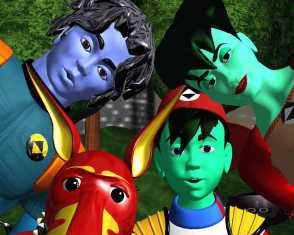 Vancouver, Canada-based animation company Rainmaker Entertainment is launching a TV division, and with it, a reboot of the classic ReBoot animated series.

Rainmaker’s TV division is a homage to the original Mainframe Entertainment, a Rainmaker subsidiary focused on computer animation, with offices in Vancouver and L.A.

The original Mainframe produced ReBoot, which premiered in 1994 on YTV, with Alliance Communications and BLT Productions. The company was also behind popular ’90s animated series Beast Wars. In 2006, Rainmaker acquired Mainframe from Starz Media as part of a series of acquisition and merger events.

The original ReBoot series was set in a computer system known as Mainframe, with sectors named after New York, L.A. and Vancouver neighbourhoods.

The reimagined ReBoot series will see Rainmaker’s new Mainframe TV division team with leading computer industry manufacturers to update the ReBoot universe and create a ground-breaking viewing experience for fans, according to a company release.

Mainframe has also optioned animation rights to Laurence Yep’s Tiger’s Apprentice book series to develop it for TV. The company has partnered with producer Jane Startz (Ella Enchanted, The Indian in the Cupboard), on the project. The coming-of-age story is a modern-day fantasy that follows a 12-year-old boy who, along with the Guardians of the Phoenix, must protect the human race from evil forces.

“We are excited to focus our television production activities under the Mainframe brand with an all-new version of ReBoot, as well as engage with celebrated children’s programming producer Jane Startz on Tiger’s Apprentice. ReBoot is certain to be embraced by a new generation of fans while Tiger’s Apprentice will provide a bold and unique television experience for kids everywhere,” said Rainmaker president and exec producer Michael Hefferon in a statement.

Mainframe will be shopping Tiger’s Apprentice at MIPCOM next week.