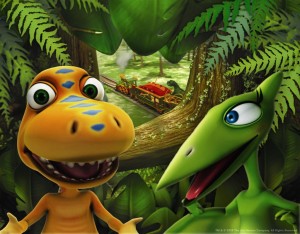 The Jim Henson Company's Dinosaur Train preschool series, which has been steadily growing within the European market, has secured a crop of new global TV, home entertainment, digital and consumer products deals across the continent.

The Jim Henson Company’s Dinosaur Train preschool series, which has been steadily growing within the European market, has secured a crop of new global TV, home entertainment, digital and consumer products deals across the continent.

The TV licensing deals for the series’ second season are with Nickelodeon in the UK, Canal+ Piwi in France and YLE in Finland. Season one of the series has been licensed to Channel 11 in Australia, while both seasons have been licensed to Canal Panda in Portugal and Zee Learn in India (Sparky Animation).

New DVD and digital distribution deals for Dinosaur Train include seasons one and two, which have been licensed to ZON Media in Portugal. Additionally, season one has been licensed to Watchever for subscription video on demand (SVOD) in Germany.

On the consumer products front, Nickelodeon and Viacom Consumer Products brokered an agreement with Aykroyd & Sons to develop children’s nightwear and underwear in the UK, Ireland and the Channel Islands; and Smith & Brook is developing children’s outerwear and swimwear.

In Germany, the company’s licensing agent Lizenzwerft brokered agreements with Popstar for party goods and with Universal Music for audio storytelling products, both physical and digital.  Nelson Verlag is also on board for coloring and activity books.

In France, Henson has appointed Studio Canal, which is already a DVD partner, as the new licensing agent for the brand.

In Russia and the CIS, Megalicense, Henson’s licensing agent for the region, has brokered a new agreement with TPK Gruppa Tovarischey for school supplies.  Over in Poland, Egmont Polska has been appointed as the licensee for books and bi-monthly magazines.

And in the Nordic region, the company’s licensing agent Alicom has brokered an agreement with publishers Sanoma Magazines for books in all formats.