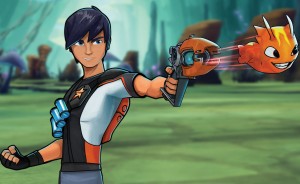 As Vancouver, Canada-based Nerd Corps Entertainment's Slugterra brand picks up the pace in the UK, the boy-skewing property is now the focus of a top-performing iOS app and new licensing deals across Central and South America.

As Vancouver, Canada-based Nerd Corps Entertainment’s Slugterra brand picks up the pace in the UK, the boy-skewing property is now the focus of new licensing deals across Central and South America.

Slugterra bowed in the region this past February, and the series quickly hit number one spots on Disney XD in Argentina and number two spots in Columbia and Brazil and has delivered strong overall performance in each territory.

Meanwhile, the first Slugterra iOS game, Slug it Out!, launched on August 29, 2013, and was ranked as the number one free action game for the iPad in nine Latin American countries. The game also delivered its highest daily downloads, active users and weekly revenues in September.