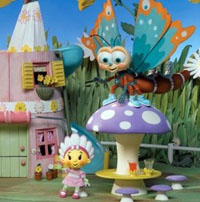 DreamWorks Animation has acquired UK-based Chapman Entertainment's TV library that includes Fifi and the Flowertots, Roary the Racing Car, Raa Raa the Noisy Lion and Little Charley Bear. he acquisition follows the one year anniversary of DreamWorks' purchase of New York-based Classic Media for US$155 million.

The Chapman programs will be distributed through DreamWorks Animation’s UK-based TV distribution operation.

The acquisition follows the one year anniversary of DreamWorks’ purchase of New York-based Classic Media and its family entertainment brands for US$155 million. And last month, DreamWorks Animation posted second quarter profits up a hefty 74% and revenues up by 31% as it appointed Nickelodeon vet Marjorie Cohn to serve as its first head of television.

As for the newly acquired Chapman series, Little Charley Bear has been sold into roughly 100 countries, including the UK, where it airs on CBeebies, which also holds the license to Raa Raa the Noisy Lion. Meanwhile, Fifi and the Flowertots has broadcast deals in more than 200 countries and Roary the Racing Car airs in 100 countries and is seen on Milkshake in the UK.