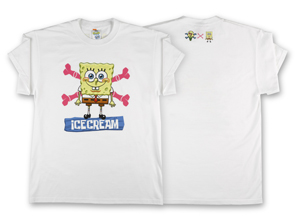 The brand-new, limited-edition SpongeBob X ICECREAM capsule collection features a series of five t-shirts and sweatshirts featuring four SpongeBob-based designs. The line is currently available online at Karmaloop.com and at the Billionaire Boys Club’s flagship New York and Los Angeles stores, as well as its webstore.

A self-confessed SpongeBob fan, Williams supported the launch on September 10 with a special appearance at the Billionaire Boys Club flagship store in SoHo, New York which is featuring the line throughout September.

The latest line comes on the heels of a successful Despicable Me 2-branded ICECREAM line that launched over the summer.