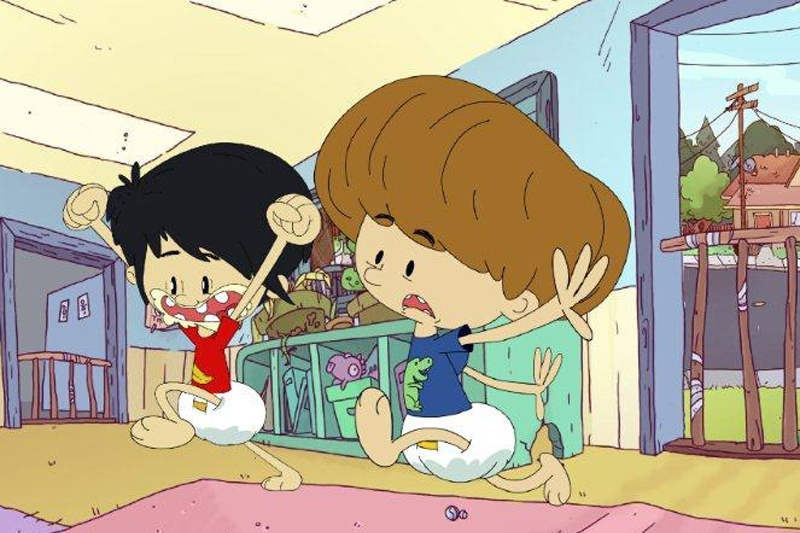 As head of content for next generation media company Alloy Digital and president of its multiplatform, teen and YA brand Smosh, Barry Blumberg knows a thing or two about what clicks with kids. He opens up to iKids about why the brand continues to make noise on the web and how the evolution of streaming services has helped support the ambitions of content creators.

As head of content for  next generation media company Alloy Digital and president of its multiplatform, teen and YA brand Smosh, Barry Blumberg knows a thing or two about what clicks with kids.

Blumberg has played a big part in helping Alloy’s networks, including Smosh spinoff and YouTube-funded Shut Up! Cartoons, reach more than 95 million consumers, with a reach to more than 57% of 12 to 34 internet users. With Shut Up! Cartoons currently nearing one million subscribers and more than 100 million views, making it one of the more successful premium YouTube channels, Blumberg talked to iKids about why the brand continues to make noise on the web, where new series may be headed and how the evolution of streaming services has helped support the ambitions of content creators.

Why has Shut Up! Cartoons become one of the fastest growing premium YouTube channels?

We’ve given content creators an opportunity to make the content that they’re passionate about, and we’ve done so with as little intrusion as possible on our end. We’ve helped them with financing, structure, distribution and programming, but we really haven’t interfered unless we need to with the production of the content.

How are programming lineups organized for Shut Up! Cartoons?

We try to run series continuously. If a show runs on Tuesdays it runs on 10 consecutive Tuesdays if there are 10 episodes. We try not to overload the channel with too much programming. Depending on production flow, we put original content up three or five days a week, but I don’t think we’ve ever gone past five days a week. We also offer a balance of content, so it’s not all male-skewing action content at one time.

What’s one of the biggest challenges you face as head of content?

You deal with a lot of different creators, forms of content and ability levels, so it’s a matter of being flexible with each person and allowing them to play to their strengths while still showing them where they have weaknesses. That’s where team members like production lead Lenora Hume have really been terrific. If a creator runs into an issue where they need a storyboard artist or they don’t know how to do something, Lenora has 30 years of experience in the animation space and can really help them get to the next step.

How do you source for the channel?

We source Shut Up! Cartoons everywhere. We go to film festivals, reach out to YouTube creators, traditional animation people and writers, but all based on the fundamental premise that everybody who has worked in the animation space has a passion project that they really want to make that no studio would ever want to make. Those are the projects we’re looking for. We’re looking for programming that we feel could have a second life on television or in merchandise.

What are the best-performing shows on Shut Up! and why?

The shows that are the closest to the Smosh brand have done the best. Anime and video game-related series Oishi High School Battle and Teleporting Fat Guy do extremely well for us. We also expect our new series Smosh Babies (pictured), which premieres August 12, to really move the needle because it stars Smosh co-founders and comedy duo Anthony Padilla and Ian Hecox as animated preschoolers in day care. We wanted to do the anti-Rugrats and they were truly the anti-Rugrats as kids so we thought the show was a good opportunity.

How do you view the evolution of platforms like Netflix and Amazon?

It is an exciting time to be a content creator. The advent of Netflix, Hulu and YouTube has made the space a lot bigger. It’s given people who might not have had opportunities in what was a very closed system five years ago to get their work seen by an audience and build a brand that would never have materialized in the analog world. Smosh is a perfect example of that.

How has Alloy Digital grown as a company?

We’ve grown accordingly. We’re a company of 200+ people. A lot of resources are used to produce and distribute content in the digital space. Shut Up! has remained relatively steady in terms of how it is managed. But we do employ a lot of outside animation studios and creators in order to facilitate that production.

Have there been any changes from season one to two in terms of production or programming efficiencies?

We’ve seen a little bit of a decline in viewership. There was a lag between season one and two, but YouTube has a lot to offer so we’re back to the building up phase to get to where we were in season one with a lot of viewership for each individual episode. We’re still doing very respectable numbers.

We’ll see how interested YouTube is in continuing the business. Hopefully we’ll get to a place where some of these series are mountable without the support of YouTube. I’d love to continue some of the shows independent of YouTube’s original programming initiative.