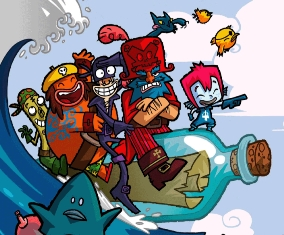 Pirate Express gets the green light

Vancouver, Canada-based Atomic Cartoons and Australia’s Sticky Pictures have greenlit 26 half hour eps (52 x 11) of Atomic Cartoons original animated television comedy series Pirate Express. For kids aged 7 to 11, the series will bow on Canada’s Teletoon in the fall of 2014 and Nine Network Australia in 2015.

The series follows the adventures of Newt, a 12-year-old boy from Atlantis and his crew on board the ship Pirate Express.

Atomic Cartoons is a full-service independent animation company that produces both original properties such as Pirate Express and Atomic Betty, as well as co-pros such as Rocket Monkeys, currently airing on Teletoon and Nickelodeon.

Sticky Pictures is an Australian production company known for such notable productions as Dennis & Gnasher based on the British comic strip, the  Dukes of Broxstonia and Pearlie.