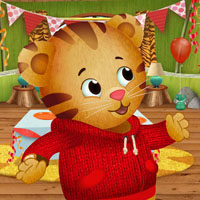 The animated preschool series has been picked up by Russia's Disney Channel and Disney Junior in Latin America and Southeast Asia.

The series, which launched last fall on CBC in Canada and PBS Kids stateside, has also been licensed to territories including Australia, France, Germany, Turkey, New Zealand, Spain and Portugal.

Daniel Tiger’s Neighborhood follows a shy but brave four-year-old tiger that lives in the Neighbourhood of Make Believe with his friends, learning lessons that prepare him for school and life.