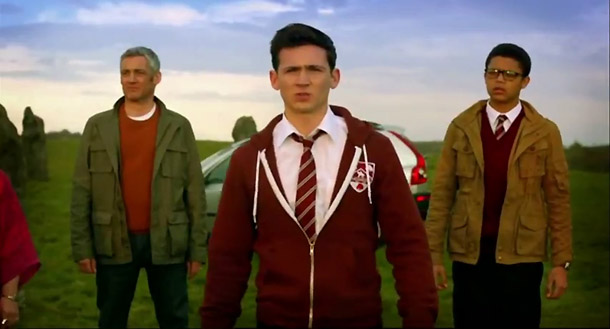 Wizards and aliens fall into US kids’ laps

In paying further attention to the second screen, FremantleMedia's Wizards vs Aliens American TV premiere will be supported by a synchronized iPad app that's being touted as the first of its kind to reach kids' hands.

In paying further attention to the second screen, FremantleMedia’s Wizards vs Aliens American TV premiere will be supported by a synchronized iPad app that’s being touted as the first of its kind to reach kids’ hands.

Developed by immersive app developer Magic Ruby, the Wizards vs Aliens app is already available in the App Store in advance of the show’s US debut on Hasbro/Discovery JV net The Hub on June 1.

The app marks the first dedicated second-screen experience for a kids TV show in the US and allows kids to sync the app with actual episodes of the show and unlock additional content relevant to each episode.  The app also offers interactive polls, alien-inspired quizzes, collectible character sets and exclusive on-set and character photos.

And on the commercial front, users can create a Wish List using the app that can be sent to parents highlighting Wizards vs Aliens-inspired products they hope to receive such as T-shirts, hats and puzzles.

FremantleMedia has already introduced second-screen experiences for its biggest and socially relevant entertainment shows, such as American Idol and The X Factor. The company’s live-action series Wizards vs Aliens follows the adventures of two 16-year old schoolboys, Tom and Benny, who battle to save Earth from an alien race.  It originally debuted in the UK to number-one ratings among kids ages six to 15.