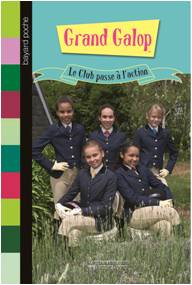 With a summer-long Versailles promotion in the works for its Totally Spies brand, Zodiak Kids CP Paris is now taking The Saddle Club (Grand Galop) to three equestrian events across France.

With a summer-long Versailles promotion in the works for its Totally Spies brand, Zodiak Kids CP Paris is now taking The Saddle Club (Grand Galop) to three equestrian events across France.

Last week, the La Baule Show Jumping Competition featured the Saddle Club Kids Village during the four-day competition. Entertainers dressed in the show’s trademark colors and offered free activities such as quizzes and games to the 30,000 or so guests in attendance.

From July 4 to 7, The Saddle Club, along with Gulli, 20 Minutes, France Inter, and CMBV, will also co-sponsor the new Grand Royal Carrousel organized by Château de Versailles Spectacles at Versailles. Inspired by the Royal Carrousel of 1662, the new event features equestrian performances, fireworks, baroque costumes and opera music.

Meanwhile, the Generali Open de France, which runs from July 6 to 28,  will see Saddle Club as a co-sponsor. The Generali Open is considered the largest horse show in the world with 500,000 annual visitors. Visible signage of the property will be placed throughout the grounds and main arenas, episodes of the series will be screened at a designated space during Pony Week, and branding will be included on the French Equestrian Federation’s website and related newsletters.

Aside from the events, Saddle Club will star in new licensed publications, including the ninth comic book from Delcrout and the ninth TV tie-in novel from Bayard.

The live-action series about young girls’ adventures with their horses has aired on Gulli since the channel’s launch in 2005. Zodiak Kids, CP, Paris manages the rights to the property in Europe.