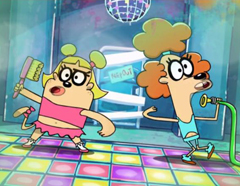 After looking at nearly 900 pitches from writers, artists, directors, designers and comedians from around the world, Nickelodeon has picked 12 finalists for its second annual Animated Shorts Program, which is intended to cultivate creative talent and develop original comedy-driven kids content.

After looking at nearly 900 pitches from writers, artists, directors, designers and comedians from around the world, Nickelodeon has picked 12 finalists for its second annual Animated Shorts Program, which is intended to cultivate creative talent and develop original comedy-driven kids content.

The kidsnet will develop the 12 concepts into fully realized shorts that could end up airing on Nickelodeon, Nick.com and the new Nick App, which is growing in popularity, attracting more than one million users since launching in February.

With the added distribution platform for shorts and growth of the program (300 more pitches compared to 2012 spanning all styles from 2D, digital 2D and CGI to stop motion and mixed media), Nick plans to further expand the shorts program with an international launch in the coming months.

According to SVP of animation development Jenna Boyd, the network’s London-based SVP of international production and development, Nina Hahn, is extending the entry deadline until Annecy in June to take internationally born pitches.

Concepts chosen from the 2013 program as finalists include Bug Salad, Earmouse and Bottle, Welcome to Woodstump and Broats. Bug Salad, created by Carl Faruolo (director of the upcoming animated Nick series Sanjay and Craig), follows the story of a naïve fly and his two best friends, while Earmouse and Bottle, from storyboard artist Brian Morante, follows a revenge story involving an indestructible Earmouse and a fragile bottle character who are cursed by an evil wizard.

Looking at the progress of the 2012 shorts program, six of the final 12 created shorts are currently in series development, including Pam and Sid’s Port-a-Party (pictured, click here for video), with two set for pilot orders. All of the shorts will head to the Nick App and most are on Nick.com.

Fans of all ages can submit entries from May 6 until June 28 for a chance to win a cash prize and a trip for four to a screening event in Hollywood.

Submissions can be live-action, animation, or stop-motion, but must celebrate SpongeBob’s humor and positivity and be no longer than three minutes in length. Additional details can be found at www.spongebobsquareshorts.com.