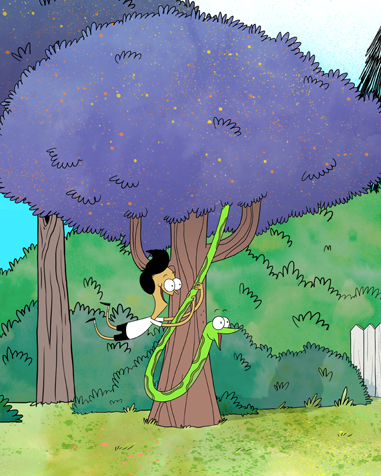 With a keen eye for comedy in tow, Nickelodeon has added the original comedy series Sanjay and Craig to its US channel lineup. The network is also bringing a second season of Tickety Toc and the anime series Yu-Gi-Oh! to its preschool and toon channels.

With a keen eye for comedy in tow, Nickelodeon has added the original comedy series Sanjay and Craig to its US channel lineup. The broadcaster is also bringing a second season of Tickety Toc to Nick Jr. and the anime series Yu-Gi-Oh! to Nicktoons stateside.

All-new comedy series Sanjay and Craig will make its debut on Nickelodeon on May 25. The 20-episode series produced by Nickelodeon Animation Studios follows the misadventures of Sanjay, an excitable and irreverent 12-year-old boy (Maulik Pancholy, 30 Rock) and Craig, a smooth-talking snake and master of disguise (Chris Hardwick, Back at the Barnyard).

The series is a collaboration between newcomers Jim Dirschberger, Jay Howell and Andreas Trolf, who have teamed with veteran writers and producers Will McRobb and Chris Viscardi (The Adventures of Pete & Pete, Alvin and the Chipmunks).

Naturally, the series will be accompanied by a dedicated page and a new online game called Rad Awesome Butt Doctors.

For the younger set, Nickelodeon has ordered up a second season of Zodiak Kids’ preschool series Tickety Toc for global broadcast on Nick Jr. Nickelodeon has picked up three additional 30-minute specials as part of the agreement.

Following its UK debut last year, Tickey Toc became the number-one rated show on Nick Jr. in the UK among kids in its launch month, and in the US, Tickety Toc is currently the number-one preschool show in its time period.

Nicktoons US, meanwhile, is tightening its grasp on Japanese anime series Yu-Gi-Oh! A new deal between Nicktoons and 4K Media, which manages the franchise in all territories excluding Asia, includes a pick-up of two seasons of the latest installment, Yu-Gi-Oh! ZEXAL, along with the entire 11-year-old Yu-Gi-Oh! library, which includes Classic Yu-Gi- Oh!, Yu-Gi-Oh! GX and Yu-Gi-Oh! 5Ds. The franchise is comprised of roughly 600 episodes.