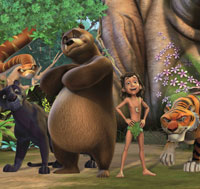 More production and broadcasting deals in the works for DQE

A number of new production and broadcast licensing deals have come to fruition for India's DQ Entertainment (DQE) on the heels of MIPTV held earilier this month in Cannes, France. Among the developments are a new Jungle Book-inspired series and an expanded production relationship with Rollman Entertainment.

A number of new production and broadcast licensing deals have come to fruition for India’s DQ Entertainment (DQE) on the heels of MIPTV held earilier this month in Cannes, France.

Among the new deals is an expanded partnership with Germany’s ZDF Enterprises (ZDFE) for the new HD series The Jungle Book Safari (26 x 12 minutes). Aimed at kids ages six to 10, the series will feature live-action documentary footage of the animals in short, non-fiction parts that will be combined with animated sequences from the The Jungle Book series.

DQE has also entered into a partnership with Rollman Entertainment for the global development, production, distribution, licensing and merchandising of animated and live-action TV series, feature films and new media content. The companies are targeting five television series through 2016 with budgets totaling US$35,000,000, as well as a slate of animated features.

Rollman and DQE already work together on NFL Rush Zone, which airs on NickToons US, as well as Iesodo and The Jungle Book theatrical animated feature, which is now in preproduction.

On the broadcasting front, DQE has inked an exclusive broadcasting agreement with Nick India for the first two seasons of The Jungle Book, Galactik Football and Suraj The Rising Star. The latter also airs on Viacom 18′s Colors channel. Nick India will broadcast the series to roughly 50 million households in the Indian Subcontinent.

Meanwhile, DeA Kids Italy has picked up DQE’s stereoscopic TV series The New Adventures of Peter Pan. DeA will hold broadcast, video and licensing and merchandising rights for Italy and Italian-speaking Europe. The series has also been acquired, through DeA, for broadcast by Sky Italia in Italian-speaking Europe, while the free TV network RAI Television will also air the show in the same region.

Other MIP deals for the company include an agreement with Israel’s Noga Communications for The Jungle Book season two and The Jungle Book TV special, as well as Robin Hood and 5 & IT.