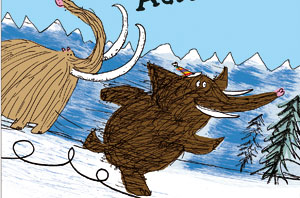 The Mammoth Academy book series, by British writer and illustrator Neal Layton, is about two woolly mammoths who start school with their friends.

“Mammoth is full of whimsy, heart and makes you think. Every story encourages the audience to wonder, question and investigate the world around them,” said TVO creative head of children and parent’s media Patricia Ellingson in a statement.

“The Mammoth Academy has that rare combination of natural appeal and intrinsic value. Set in the Ice Age, it is nonetheless warm and fuzzy and totally contemporary,” said Sardine Productions president Ghislain Cyr in her own statement.

Sardine will develop 26 half-hour episodes of the show.