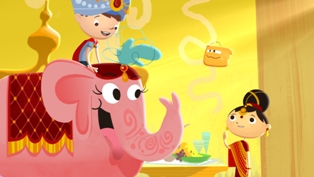 Netflix has acquired the subscription video on-demand rights to the series’ first two seasons for the US and UK and has picked up the first season for Latin America. Justin Time will join Netflix’s Just For Kids portfolio in the US and UK starting April 1 and in Latin America starting in June.

Guru says the Netflix deal signifies a big step for the company, which is in the process of expanding its workforce and production output. Netflix launched Just For Kids in August 2011 in an effort to accommodate its growing young audience. Last year, Netflix members watched more than two billion hours of kids content. And the streaming giant just last month announced its plans to launch original children’s programming.

Justin Time currently airs in more than 70 countries and is aimed at kids ages three to six.