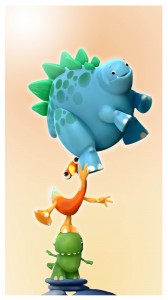 BBC Worldwide has also picked up global television distribution rights (outside of the UK and Canada) and global merchandising rights.

Dinopaws went into production in December 2012 and is planned for delivery in spring of 2014. The preschool series is set to air in 2014 in Canada and the UK and on BBC Worldwide’s CBeebies channels across its six key markets (Poland, the Nordic region, Africa, Australia, Asia and the Latin American and US Hispanic markets).

The original concept was created and developed by Alan Gilbey at Kindle Entertainment and Impossible Kids, together with Guru Studio.