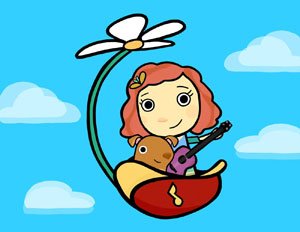 Sprout gets more musical with Little Airplane’s Sing It, Laurie!

The short-form series, which debuts exclusively on the network beginning March 25, tells the story of a little girl who uses music to better understand her world. The series features original music from Berkner and also stars recording artist Lisa Loeb, who performs the roles of twin sisters Mellie and Nellie.  The music for the show was produced at Little Airplane by Emmy Award-winner Jeffrey Lesser (Wonder Pets).

Partners on the series include Razor & Tie, the largest privately owned independent music label in North America, and Tsumanga Studios, a games developer and publisher based in Scotland.

In addition to Sing It, Laurie!, Sprout will be introducing a variety of music videos from artists such as The Wiggles into its afternoon block.  Coinciding with the debut of musical afternoons on Sprout, a music microsite will be launching on SproutOnline.com where preschoolers and their families can watch full-length videos on a special video player and play games such as Sing It Laurie Musical Adventures and Chica’s Costume Concert.