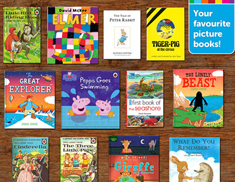 Me Books partners with Scholastic UK

In a new deal that further expands its kids book offerings for iOS devices, digital book shop Me Books has paired with Scholastic UK which will provide popular children's titles including Little Deer Lost and Daddy's Little Star.

In a new deal that further expands its kids book offerings for iOS devices, digital book shop Me Books has teamed up with Scholastic UK to provide popular children’s titles including Little Deer Lost and Daddy’s Little Star.

The new titles, along with six additional ones to be added through March, will join the Me Books app library of more than 130 acclaimed kid’s books including Ladybird Classics Peter Rabbit, Topsy & Tim and Peppa Pig.

Me Books, which launched in October 2012 and already has partnerships with Penguin, Puffin, Bloomsbury and Andersen Press, feature draw-and-record technology and the narration talents of British celebrities such as Richard E. Grant, Sir David Jason, Rik Mayall, Tamsin Greig, Adam Buxton and Josie Lawrence as narrators.

The app now sees 1,000 downloads on average per day and is also expected to debut on Android devices and in the US in May.