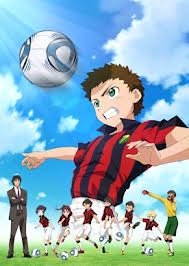 Distributed in Europe by VIZ Media, Victory Kickoff consists of 39 episodes aimed at kids ages seven and up. The series is broadcasted by NHK in Japan and was developed by Nihon Ad Systems (NAS), the creators of anime series Prince of Tennis and Yu-Gi-Oh.

The show was adapted from the Galaxy World Cup novel by Hiroto Kawabata and tells the story of 12-year-old Sho Ota who dreams of becoming a football champion.