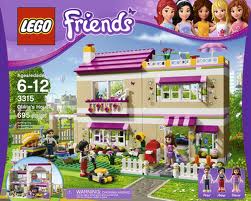 Girls-skewing game Lego Friends and LeapFrog's LeapPad2 were among the top winners at the 13th annual Toy of the Year (TOTY) Awards, which kicked off this week's Toy Fair in New York City.

Girls-skewing game Lego Friends and LeapFrog’s LeapPad2 were among the top winners at the 13th annual Toy of the Year (TOTY) Awards, which kicked off this week’s Toy Fair in New York City.

The Toy Industry Association (TIA)-administered event in support of the Toy Industry Foundation (TIF) paid homage to products across 12 categories – from e-Connected and Innovative to Educational and Outdoor.

Meanwhile, Judith (Judy) Ellis, Chair of the Toy Design Department at the Fashion Institute of Technology, and the late Russell (Russ) Berrie, founder of Russ Berrie, were inducted into the Toy Industry Hall of Fame.

Award winners were selected with the input of consumers (on ToyAwards.org), retailers (mass and specialty), media and members of the toy industry.  A full list of winners can be found here.