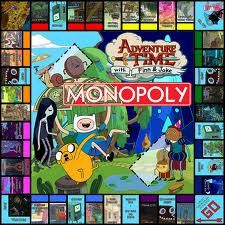 Monopoly among new Adventure Time games in the works

Cartoon Network's Adventure Time brand is headed for the Monopoly board as well as other branded games and puzzles thanks to a new lineup of licensing partners.

Cartoon Network’s Adventure Time brand is headed for the Monopoly board as well as other branded games and puzzles thanks to a new lineup of licensing partners.

The products, which will roll our this Spring and throughout the rest of the year, include a Monopoly: Adventure Time Collector’s Edition from USAopoly that features 22 locations from the Land of Ooo and six collectible tokens. (USAopoly has created more than 100 specialty editions of Monopoly to date.) Also from the company is a Memory Challenge Adventure Time Edition game that includes  56 character cards and 16 item cards.

Meanwhile, Jazwares will add new items to its toy line including role play items, new 3″ figures and comic book packs, and an expanded offering of consumer electronics.  Funko will expand its lineup of vinyl figures, while Briarpatch will debut a series of Adventure Time-themed games and puzzles.

Created by Pendleton Ward, the Adventure Time TV series is an original animated comedy from Cartoon Network that follows the everyday adventures of unlikely heroes Finn the Human and his dog Jake.