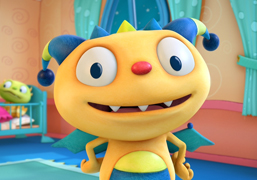 Henry Hugglemonster, the latest 3D-animated preschool series developed and produced by Disney's London-based production hub in partnership with Ireland's Brown Bag Films, is set to bow on Disney Junior in the UK on February 8.

It’s been four years in the making, but come February 8 at 5:50 pm, Disney Junior viewers in the UK will get their first look at Henry Hugglemonster, the latest 3D-animated preschool series developed and produced by Disney’s London-based production hub in partnership with Irish animation studio Brown Bag Films.

Why take note? The new 52 x 11-minute series (formerly The Happy Hugglemonsters) for kids ages two to seven is based on the popular children’s book I’m a Happy Hugglewug, by Dublin, Ireland-based author/illustrator Niamh Sharkey, and published by Walker Books. 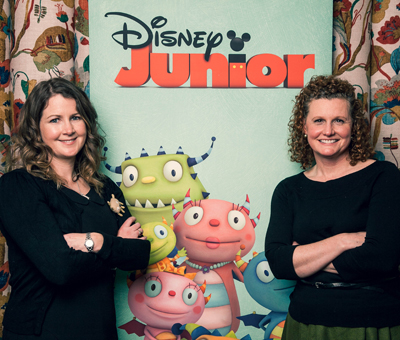 After its UK premiere, Henry Hugglemonster will bow on Disney Junior in the US in April then roll out to more than 150 countries worldwide.

Behind the scenes Sharkey, who is currently the Children’s Laureate of Ireland, was involved in every step of the production and even shared an office at Brown Bag with Virgien and Paladino to enhance the creative, collaborative experience. She says creating the series provided fun, new challenges.

“We had the family from the book, but we had to create their world and a whole new cast of monster friends like the Enormomonsters for Henry to interact with,” says Sharkey. “Brown Bag created a world that allows for fast-paced camera work. Rather than design separate sets, it’s a world where the camera can move anywhere. It can zoom down on the town, through hollows and even shoot underground where some of Henry’s friends live.”

The series, according to Gardiner, differs from other preschool fare because Henry speaks directly to the viewer, but more as an emotional way of connecting. “He wants to share his emotions rather than look to the audience for answers,” says Gardiner. “Like a lot of five-year-olds he’s really opinionated and tells the audience what he’s learned and how he’s feeling.” She also notes that Norton infused the show’s visual storytelling with a lot of energy and physical gags that aren’t normally seen in preschool TV.

One thing that has remained constant from book to screen is the look of the characters. “I put texture underneath my paintings, so there’s a kind of brush stroke feature to the characters that we’ve retained in the series,” says Sharkey, whose obsession with monsters came from growing up watching The Muppet Show every Sunday night with her family, and being influenced by Maurice Sendak’s Where the Wild Things Are.

What’s next? As the premiere date looms, Gardiner and Sharkey hope to develop more Henry Hugglemonster stories and are just beginning the process of delivering two half-hour specials for the series, one for Mother’s Day and a seasonal story.