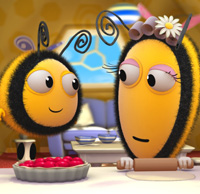 Joester Loria will develop a retail-driven licensing program aimed at young fans of the show, which is now airing on Disney Junior in the US.

Meanwhile, The Hive’s UK licensing program is gaining momentum. Mookie Toys has been announced as master toy partner and has released an extensive range of plush. LeapFrog has released video packages on the LeapPad learning tablet and Leapster Explorer learning console , while other UK licensees include Jupiter Toys (wooden toys and furniture), Blues Clothing (children’s apparel), Aykroyds TDP (children’s sleepwear), and a recently announced deal with Ravensburger (Jigsaws & Puzzles).  In addition, Space and Avanquest are set to launch iOS games apps on iTunes.

Produced by Monumental Productions, Lupus Films and DQ Entertainment, The Hive is a 26 x half hour series that made its US debut in October in a deal secured by distributor Bejuba!