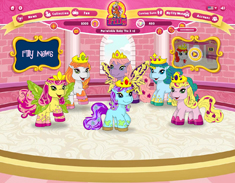 IP owner Dracco has released the first app and website based on its brand new girl-skewing, horse-themed toy brand Filly.

IP owner Dracco has released the first app and website based on its brand new girl-skewing, horse-themed toy brand Filly.

Filly.com lets kids create their own Filly which can be entered in real-time pageants. By playing mini-games such as Bake a Cupcake, users can earn special “horseshoe” currency to customize their Filly environments.

The Filly Photo Fun App is now available as a free download for iOS devices and as a full version for 99 cents. The interactive app allows kids to decorate their own sharable photos with stamps, frames and Filly characters.

As part of the brand’s expansion, a 26 x 26-minute 3D-animated Filly TV series is already in active development and planned to air in early 2014.

To date, Dracco has sold more than 60 million Filly dolls, with their strongest sales in Germany and Poland. A Filly magazine has also found success in Germany and has launched in 13 additional European countries.

The collectible toy is distributed throughout Europe, as well as North and South America. Master toy licensee Simba Dickie Group is supporting the property globally.