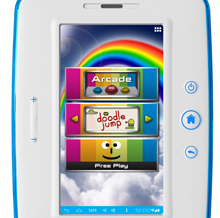 The Android 4.0 OS device features a customized suite of apps, including Kids Cam and Music Studio and Draw and Kids Vids, which allows children to stream vetted video through the device. As well, the tablet includes side and rear bumpers to create a kid-friendly and durable package.

The Polaroid kids tablet is also preloaded with the NOOK e-reader from Barnes & Noble and a variety of kids literature including titles from Dr. Suess.

The device will retail for US$149.99 and is currently available at online at the Polaroid store and in store at Kohl’s retail outlets later in January.

Polaroid joins an ever-growing group of kids tablet manufacturers, including Toys ‘R’ Us, TechnoSource and Oregon Scientific, which has released new products in the last four months.