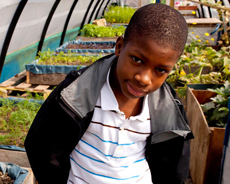 UK kidcaster CBBC has commissioned a fourth seven x 30-minute season of the acclaimed documentary series My Life, which is set to debut in February 2013.

UK kidcaster CBBC has commissioned a fourth seven x 30-minute season of the acclaimed documentary series My Life, which is set to debut in February 2013.

The films, each from a different independent production company, follow the lives of children across the UK with unique personal stories.

Dene Films’ contribution, I Am Ethan, follows a deaf boy who starts a band with his two best friends, while The Climb, by producer Alleycats, tells the story of a 13-year-old girl who plans to become the youngest girl ever to scale Yosemite’s El Capitan.

Additional films include Watershed’s Who Are You? featuring a girl with face blindness, Blakeway North’s My Big Family Wedding about a Mormon girl who is one of 12 siblings, and Mark Three Media’s Breaking Free, which follows three children with Down’s Syndrome on their journey towards independence.

Lambent Productions’ What’s A Girl and Nine Lives Media’s story about two girls with burn scars round out the films.