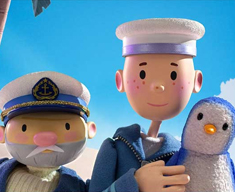 UK-based Union Media has been appointed as the international distributor for the new stop-motion comedy series Calamity Island.

UK-based Union Media has been appointed as the international distributor for the new stop-motion comedy series Calamity Island.

The 52 x seven-minute series set to air on CBeebies in 2014 is produced by UK-based prodcos Famous Flying Films and Mackinnon & Saunders and is created by Famous founder David Johnson (Koala Brothers).

Calamity Island focuses on visual, slapstick comedy and follows the misadventures of two shipwrecked sailors who are forced to share a tropical island with its inhabitants – namely a pesky penguin.

To date, a pilot episode has been produced and animatics of two additional eps are being readied for January 2013.