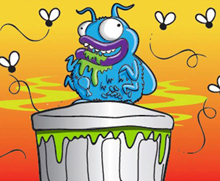 Spain’s E-max has signed a worldwide deal, excluding North America and Australasia, for a sticker collection and a trading card game that will hit retail from early spring 2013.

Also for spring 2013, specialist publisher DJ Murphy will produce a Trash Pack magazine across the UK and Eire. The third deal will see Bristol-based firm Rudolf Stein offer new collectable accessories for bags, shoe laces, bikes, scooters and windows. The products will be available for the UK and Eire in the second half of 2013.

Toyco Flair launched The Trash Pack master toy collection in the UK and Eire in late 2011 and in May 2012, while owner Moose Toys added new licensees to the US licensing program for the IP in deals brokered by Toronto, Canada’s The Licensing Shop.