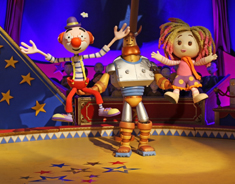 In a move to expand the multimedia experience for hit stop-motion animated series Toby's Travelling Circus, UK-based Komixx Entertainment has launched a new microsite for the property.

In a move to expand the multimedia experience for hit stop-motion animated series Toby’s Travelling Circus, UK-based Komixx Entertainment has launched a new microsite for the property.

Toby’s Travelling Circus, which now reaches two million viewers since its September 15 debut on Channel 5′s Milkshake! in the UK, follows the story of a regular seven year-old boy who happens to be the ringleader of his own magical travelling circus.

The web launch comes as Milkshake! is set to air “Snow Baby,” a Toby’s Travelling Circus Christmas special for December 23.

Produced in the UK by Manchester’s MacKinnon & Saunders studios, the series also has a new rep in UK-based Union Media who signed on in August to handle global distribution rights for the brand.