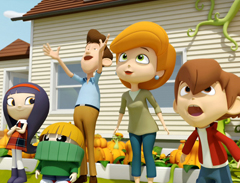 With a total investment of US$6.5 million, a 52 x 11-minute first season is planned with Motion Pictures taking on concept development and pre-production, Young Jump leading animation production and Sample offering audio and video post-production.

Pre-production is expected to start in March, with initial broadcast slated for the end of 2014.

The series, targeted to kids ages six to 10, is based on an original concept developed by Motion Pictures, the show’s global distributor.

Pumpkin Reports is set in Cucurtown, the Pumpkin capital of the world, and follows the adventures of 11-year-old hero Max Green who must thwart an impending alien invasion after encountering a mysterious girl and her baby brother who claim to be his new siblings.