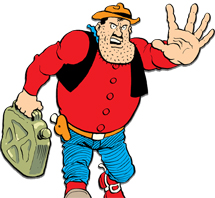 Issue zero is currently available digitally for PC and Mac and will hit tablets and smartphones as an app at a later date. The online site’s weekly digital editions will provide motion comic strips featuring interactive games embedded within the stories. Issue one features a Bananaman game and Dandy Dollop, a digital pet for kids.

Additional features include a joke shop, and a Dandy TV show with game reviews, celebrity interviews and a Dandy news round-up presented by television presenter and comedian Chris Cohen.