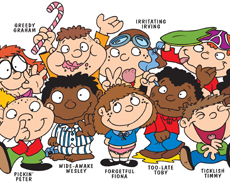 Little Monsters was originally launched 20 years ago and became a successful publishing and animated TV brand. In the Nineties, the IP’s publishing program reached 32 countries worldwide and a BBC TV series ran from 1997 to 2002. To date, 60 publishing titles are available and 45 million books are in print globally.

A new TV series is currently in development for early 2014.