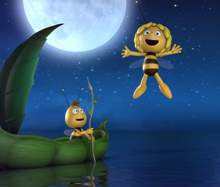 Maya the Bee buzzes to the big screen

The announcement marks the first animated feature to be produced as an official treaty co-production between Australia and Germany.

Maya the Bee the movie, co-produced with Studio 100 Media, will follow the adventures of main character Maya and her desire to escape her regimented hive life for freedom and exploration.

Maya the Bee is based on the German book of the same name, which is now enjoying its 100th anniversary, and has a long history comic books and television. The newest Maya the Bee TV series from Flemish kids TV producer Studio 100 is produced by Studio 100 Animation, in association with TF1 and ZDF. The brand has also expanded into consumer products and publishing.