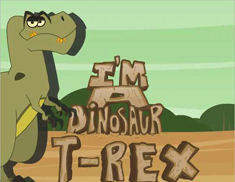 I’m A Dinosaur (52 x two minutes) currently airs in Canada on TVOntario, TFO, SCN, Knowledge Network, and is distributed by Monster Distributes and produced by Adam Mimnagh. The series was recently picked up by Discovery Kids and since its YouTube arrival, “I’m a Dinosaur – Apatosaurus” has attracted more than 400,000 views.

Huminah, which has done 3D service work on TV series including Mike the Knight, is also a gaming studio and opened a new post in Hamilton, Ontario in October 2011.

Here’s a clip of “I’m a Dinosaur – Apatosaurus”: