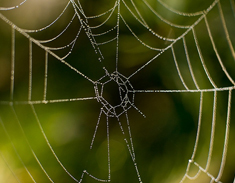 Maybe it's just my four-year-old's obsession with Spider-Man, but I've been thinking a lot about webs recently. The webs I have in mind, however, are something pretty different than what Peter Parker's alter ego and his arachnid relatives spin. The webs I've been thinking about are character webs - why these kinds of webs are so important, and how they can be applied to developing great games for kids.

Maybe it’s just my four-year-old’s obsession with Spider-Man, but I’ve been thinking a lot about webs recently. The webs I have in mind, however, are something pretty different than what Peter Parker’s alter ego and his arachnid relatives spin. The webs I’ve been thinking about are character webs – why these kinds of webs are so important, and how they can be applied to developing great games for kids.

First, I guess I should explain what the heck I mean when I say “character web.” A lot of the writers out there are probably already familiar with the term, but a character web is essentially a group of characters in a property who interact with each other. The easiest way to describe this is to think of pretty much any great television series. Whether it’s 30 Rock, The Sopranos, Sesame Street, or Homeland, most narratively successful shows are built around a set of complex interrelationships between their characters. Each individual character is important and has distinguishing characteristics that makes them unique, but what drives the story is the way that these different characters react to the same situation and to each other.

One of the kids properties I often think about when I think about character webs is Winnie the Pooh, an all-time classic. Winnie the Pooh is an amazing character, with lots of different appealing qualities that make him unique. But when you put together Winnie the Pooh and Piglet, things get so much richer — the relationship between the big, jolly enthusiast and the small, nervous but huge-hearted friend is the stuff that great stories are made of. Then add Owl, or Rabbit, or Roo, or Tigger, and things only get funnier and more complex. Combining any two or three of these characters automatically sets in motion a series of dynamics that are both predictable and a joy to watch unfold. Watching Rabbit’s anal-retentive side brush against Tigger’s careless exuberance or Owl’s pontificating or all of these at the same time makes for a surefire comedic moment. And the sweetness that characters like Piglet and Roo and Christopher Robin bring to the mix round out the property without making things saccharine.

So character webs are an integral part of most traditional storytelling, but they’re less common in interactive properties, especially those for kids. There is a tendency in interactive development to focus on one main character at the expense of including others, and this makes sense on some levels. There’s not the time in games to spend explaining backstories or complicated interrelationships, and the emphasis should rightly be on playing and interacting and not passively listening to background information.

I truly believe, however, that a great character web, whatever the medium, isn’t about stopping the action to explain things. If you think back to Winnie the Pooh, no narrator pops up and says, “Well, let me explain what’s going on here. Pooh loves honey so he’s going to do anything to get it and Rabbit’s impatient and so he’s going to be frustrated with that…” and so on. Even in the very early Winnie the Pooh stories, these qualities are communicated through the characters’ actions, not long speeches or narrative commentary. The same is true of any well done sitcom. No one on 30 Rock interrupts the storyline to say, “Well, Liz is kind of neurotic and Tracy is a spaz and Jenna only thinks about herself, so when they get together, watch out!” Rather, those great dynamics are just a part of the show, and they play out in each story in a way that’s self-explanatory even for people who haven’t watched every episode.

There’s no reason that games can’t do this as well – and I really believe that kids are sophisticated enough to pick up on those dynamics, and understand and enjoy them, without having to be lead through each relationship with tons of dialogue or text. So, I’ll continue to advocate for character webs in kids games. The richness and opportunities both for humor and emotional engagement can go a long way in terms of making kids emotionally invested in what they’re playing. After all, entering into a world of friends to play with is what kids love to do, whether they’re in the schoolyard, watching television, or playing on a tablet.

Be part of our character web! Email us at kidsGotGame@noCrusts.com or follow us on Twitter at @noCrusts.