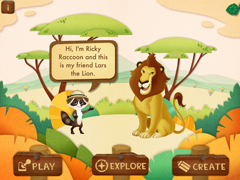 Ranger Rick Jr. is set to launch in December 2012 and features young character Ricky Raccoon, who assists young readers as they explore the magazine’s 36 pages of animal content, activities, fun facts and photos.

Ranger Rick Jr. Appventures – Lions from acclaimed developer Moonbot Studios is now available on the iTunes App Store and is the first of a series of storybook apps that highlight a different animal in each app. The premier app features characters Ricky Raccoon and Lars the Lion, photo stories, games, picture creation, and music.