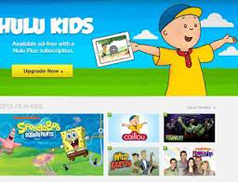 Categories include Cartoon Favorites, Dino Time for dinosaur-themed shows (Barney, Dino Time) and Shows You Watch which compiles shows based on a child’s viewing habits.

Age-appropriate sections are also broken down from two- to four-year-olds up through eight- to 10-year-olds.

The new service follows in the footsteps of Netflix which launched its Just For Kids section more than a year ago and recently made it available for the iPad. It’s also available for XBox 360, PS3, Nintendo Wii, Apple TV, PC, Mac, and select Smart TVs, Blu-ray players and streaming media players.