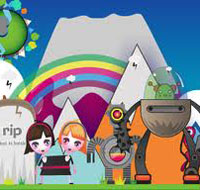 Fight My Monster battles into books

The first title, Fight My Monster Monstrous Official Guide, was just released on October 25 and features tips to help users improve their gaming strategy. Two additional titles will be published through summer 2013.

Since Dominic Williams founded Fight My Monster in 2011, it has amassed two million players and more than eight million customized monsters creations.

The latest deal comes on the heels of Dimensional Branding Group, in association with Russell Binder of Striker Entertainment, being appointed the licensing rep for the IP.