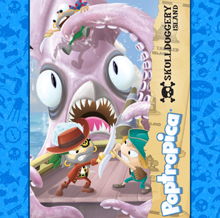 More information about the books including the existing Poptropica: The Official Guide can be found at www.poptropica.com/books/.

Poptropica is the creation of Jeff Kinney, the author of the bestselling “Diary of a Wimpy Kid” series. Since launching in 2007, the site now boasts more than 250 million visits by kids worldwide and was named as one of TIME magazine’s top 50 websites of 2011.

In addition, more than 60 million friend connections have been made globally in the site’s safe social network offering, Poptropica Friends.