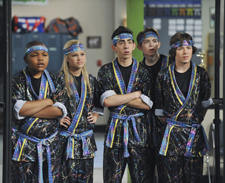 The third season, which will resume production in Hollywood in January 2013, will once again follow the lovable young students at Bobby Wasabi Martial Arts Academy as they embark on new adventures outside the dojo.

The series is produced by It’s A Laugh Productions.