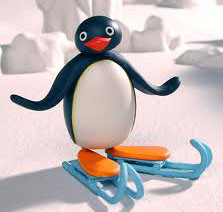 This month, ZAP will premiere JimJam’s hit animated series Pingu and Christmas specials of Wind in the Willows and Bob The Builder are also scheduled to air.